Luis Valdez Leadership Academy founding Director/Principal and former Teaching Ambassador Fellow for the U.S Department of Education Jeffrey Camarillo, C’01, speaks about the impact the Netter Center has had on his life at and post Penn.

“My experience working for the Netter Center as a teacher at Turner Middle School was the single most transformative experience in my time at Penn." 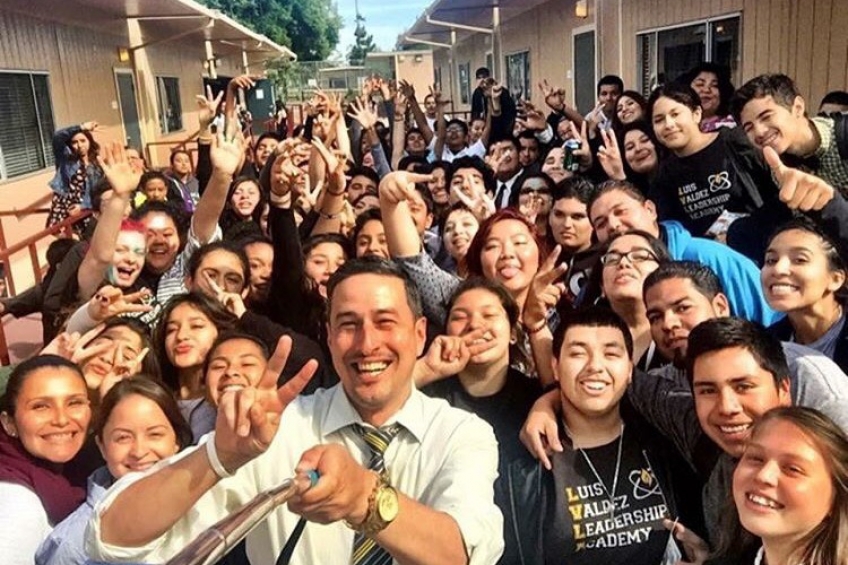 Jeff Camarillo with his students from Luis Valdez Leadership Academy

Inspired by the ABCS course, Jeff decided to stay in Philadelphia for the summer and continued working with the Netter Center (then the Center for Community Partnerships) throughout his time at Penn, including taking three additional ABCS courses. For three years, Jeff traveled to West Philadelphia twice a week with other Penn undergrad students to work with middle school students at Turner, one of the Center’s earliest university-assisted community school partners. Jeff formed Da Bomb, an after school literacy program that engaged Penn undergraduates in supporting Turner students in the creation of a Hip-Hop and R&B music magazine. These experiences taught him about inequity, and the urban crisis that is education.

“My experience working for the Netter Center as a teacher at Turner Middle School was the single most transformative experience in my time at Penn. What resonated the most was Netter’s and Penn’s deep commitment to community. I wanted to leverage all the experiences to ultimately create a better way of life for under-resourced communities,” Jeff said. This led him to major in urban studies and education.

Upon graduation, Jeff became a middle school teacher in Compton, California. He then returned to his hometown to earn his Master’s degree and teaching credential from Stanford University, and later received a degree in educational leadership from San Jose State. From 2010-2011, he also served as a Teaching Ambassador Fellow for the U.S Department of Education.

For the last four years, Jeff has been the founding Director and Principal of the Luis Valdez Leadership Academy (LVLA), a personalized, college-prep charter high school in East San Jose, CA. LVLA’s mission is provide a rigorous academic program designed to instill a lifelong passion for learning and to equip students with the skills for social and academic success at four year colleges, universities and local community colleges.

His work with the Netter Center has helped Jeff tremendously in running LVLA. As Jeff states, “It helped me understand the importance of communication, compassion, developing a deep partnership with Stanford University and fostering a strong culture for our educators.” LVLA’s results have been truly remarkable. Over seventy five percent of its students continue to college. This compares to the fourteen percent average for Latinos in California.

For Jeff, the primary driver is to enhance educational opportunities for Californians in under-resourced communities in a much broader way. “Netter has had a lasting impact on my desire to better understand urban communities and to ultimately serve them. My long term goal is to get involved on a district leadership level, or work in policy through larger educational agencies to have the greatest impact on such communities.