Richard (Rick) Horowitz, C’83, PAR’15, PAR’16, Netter Center National Advisory Board member and an Overseer of Penn’s School of Arts and Sciences, reflects on his time at Penn and Dr. Harkavy’s impact on his life and others here and around the globe.

“Ira and the Center have fundamentally changed the University’s relationship with the community.” 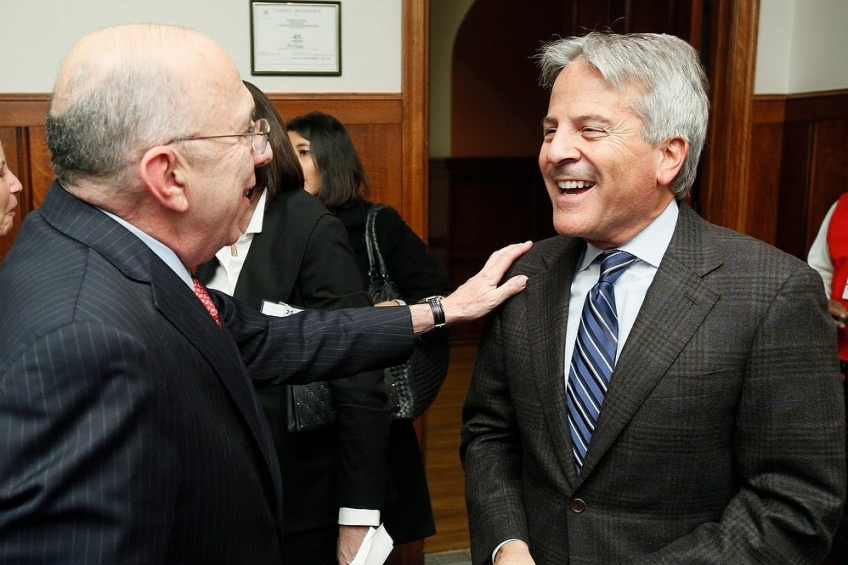 During the spring of 1982, Rick took Dr. Harkavy’s course on Democracy and Partnerships at Penn. This course existed prior to The Netter Center and Center for Community Partnerships. As part of the course, Rick had to choose a local problem and write a significant research paper on how to help solve the problem. “Ira always had this notion, derived from [John] Dewey, Lee Benson and his own work, of the integration of service into academic work in a manner that would enable students to create comprehensive solutions to pressing problems. From him, I learned the power of using academic disciplines and resources in real time to address and even solve real world problems. My work with Ira also reaffirmed my commitment to community service, both because it mattered and because it provided me with personal growth and fulfillment,” Rick said.

“After I completed Dr. Harkavy’s course, I spent the following summer working as an intern for him in the Dean’s office of what was the University’s College of Arts and Sciences. Part of my charge was to speak with various faculty members and the deans of other schools at Penn about what we now know as Academically Based Community Service (‘ABCS’); frankly, there wasn’t much interest,” reflected Rick. “That’s what is so powerful about where Penn and the Netter Center are today. And it is not a coincidence that the rise to prominence of this work over the last 35 years, and particularly, during the past 15 or 20 years, has coincided with Penn’s rise as a preeminent institution, able to compete on a level playing field with the Harvards, the Princetons, and the Yales.”

After graduating from Harvard Law School, Rick returned to Philadelphia to practice law, while his wife enrolled at The Wharton School. Soon after, Rick decided to enter the private equity business but continued his deep involvement with non-profit organizations. He also got reconnected to Penn and Dr. Harkavy. Rick states, “I was so inspired with what Ira had accomplished and the enormous progress he had made.” After spending time together, Rick suggested that Ira create a national board of alumni and supporters of the Center. Rick has been a National Advisory Board member since its inception in the late 1990’s and served as the chair for approximately 12 years.

“Since then, Ira and the Center have fundamentally changed the University’s relationship with the community. Ira was ahead of his time on the pedagogy approach – the emphasis on problem solving and an active approach to learning. It was the core of what Ira spoke about 30 years ago and continues to emphasize today. We were also exceedingly fortunate to attract Barbara and Edward Netter, who brought to the Center a powerful combination of generosity and leadership, wisdom and humility. Their involvement has propelled the Center forward and also enabled us to support the replication of our work on a formal basis at other leading universities in the United States and in a less formal way at universities throughout the world,” Rick states.

Rick now serves as President and Chief Operating Officer of RAF Industries. In addition to his role on the Netter Center Board and as an Overseer of the School of Arts and Sciences, Rick is on the Board of Directors of the Children’s Crisis Treatment Center, the Wistar Institute, and the National Constitution Center.

Looking back at his time at Penn, Dr. Harkavy’s course and his involvement with Netter has left an indelible mark on the way Rick approaches both his personal and professional life. Rick states, “Most students at Penn will not go forward from West Philadelphia to pursue a career in the non-profit world, but it is and should be part of the University’s mission to instill a commitment to service and community in our graduates. Our graduates, regardless of their vocation, will have meaningful opportunities to give back, and part of their education and maturation at Penn should be the development, to paraphrase [Benjamin] Franklin, of the ability, together with the inclination, to serve. It is also really important for our students to learn through hands-on experience how diverse the world is and how much one can learn from others with whom one seemingly has little in common. Finally, the problem solving piece is so critical, especially learning to be effective with limited resources. It is at the core of what one needs to be successful in any endeavor.”